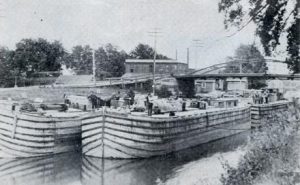 A Brief History of Spencerport, NY

The Village of Spencerport, prior to the building of the Erie Canal was just another farm. The farm, through which the canal passed at the Canawaugus Road, had been purchased by Daniel Spencer in 1804 and was sold off to become the first village lots. The village began about a mile and a half north of Ogden Center where business had begun to flourish. From that moment on, however, business in Ogden Center decreased and that of the new canal port increased.

The village was first called “Spencer’s Basin” but was soon changed to “Spencerport”. As commerce on the Erie Canal prospered, so did the fortune of the residents of Spencerport. In the late 1800’s Spencerport was a bustling canal center. Warehouses shipped out produce such as grain and beans. By 1900 Spencerport had 3 hotels, 3 grocery stores, 2 drug stores, and 2 shoe stores. Shops encompassed every trade and included 4 blacksmith shops, 3 cooper shops, 2 sheet metal shops and many other trades. Manufacturers included a fruit-press manufacturer and a sash & blind factory.

On April 22, 1867 the State Legislature passed an act to incorporate Spencerport as a Village and the first elections were held with William Slayton as the first President. The office is now known as Mayor.

At the turn of the 20th century business in Spencerport was still prospering. In 1910 the Chamber of Commerce had a banquet with 100 in attendance from both Spencerport and Ogden. By 1917, with WW I being fought, the demand for produce was a boon for Spencerport farmers. Many young men from the area were either involved in the war effort or making high wages at defense plants in Rochester.

Municipal water was installed in 1912 through the efforts of many prominent citizens. This greatly aided the efforts of local fire fighters, with hydrants strategically placed throughout the village. Electricity was made available in 1917. During the early 1920’s all the streets in the village were paved. Sewers were installed in 1931 and a disposal plant was built that year as well.

Condensed and compiled from portions of the book; 150 Years in Ogden – 100 Years in Spencerport by Earl E. White, published 1967. For much more detail on the history of Spencerport as well as Ogden, this book can be found at the Ogden Farmer’s Library.

A Walk thru History